≪Ancient temple founded by Gyoki, then revived by Ennin≫
Kokuseki-ji is an ancient temple, said to have been founded by the great priest Gyoki in the first year of the Tenpyo Era (729). It was first known as “Tokozan Yakushi-ji Temple.” However, the temple was destroyed by fire during war between the ‘Emishi’ and Imperial Court forces.

In year 2 of Daido (849), carpenters from Hida Province (present day Gifu Prefecture) rebuilt the YAKUSHI-DO Hall (a temple hall dedicated to the Physician of Souls). Then in year 2 of Kasho (849), Ennin (Jikaku Daishi), the third head abbot of the Tendai sect, revived the religious faith and changed the name to MYOKENZAN KOKUSEKI-JI. At its prime, there were as many as 48 temple buildings, but all of the buildings were burnt to ashes due to several terrible fires, including a forest fire in 1261, a fire due to war in 1590, a fire that went out of control during a festival in 1840 and the most recent fire in year 14 of Meiji (1881). The current HONDO (Main Hall) and KURI (priest’s quarters) were rebuilt in year 17 of Meiji (1884).

The principal image is a wooden statue of YAKUSHI NYORAI (the Buddha of Healing) seated, and there are some characters written in SUMI (Chinese black ink) that read “Year 4 of Jogan” (862) inside the body. It is a precious statue of Buddha that reflects the Buddhism faith of ancient northeastern Japan. In addition, the SOMIN-SAI Festival of Kokuseki-ji Temple is also a precious national inheritance that conveys the ancient ways to the present age.

YAKUSHI NYORAI (Nationally Designated Important Cultural Property)
The wooden statue of the Buddhist of Healing seated is the principal image. It is made from a single piece of wood known as KATSURA (Japanese Judas tree). The inside of the statue is hollow and there are some characters written in SUMI (Chinese black ink) that read “Year 4 of Jogan” (862) inside the body. The manly rigid features, the ruggedly squared shoulders, the knees widely opened, the simply carved folds in the robes. All of these features show the grandness of statues created in the northern provinces, located far from the capital. Height: 126㎝

NIKKO and GAKKO BOSATSU (Important Cultural Properties designated by Iwate Prefecture)
These two wooden statues are of flanking attendants standing by the YAKUSHI NYORAI. They are said to have been donated by the second Hiraizumi lord, Fujiwara Motohira. Work of the late Heian period.

SOGYO ZAZOU-JIKAKU DAISHI (Nationally Designated Important Cultural Property)
This wooden statue of a Buddhist monk seated is made from a single piece of wood. On the back of its knee, there are some characters written in SUMI that read “Year 2 of Eisho” (1047). Earlier, it had been enshrined in a hall built on Mt. Daishi. Height: 67㎝

Standing statues of SHITENNO(Nationally Designated Important Cultural Property)
These wooden statues of the Four Guardian Kings, JIKOKUTEN, ZOCHOTEN, KOMOKUTEN, and TAMONTEN, standing, are each carved out of a single piece of wood. They were made at approximately the same period as the principal image of YAKUSHI NYORAI.

Standing statues of JUNI SHINSHO(Important Cultural Properties designated by Iwate Prefecture)
Wooden statues of twelve standing protective deities with one of the twelve signs of the Chinese zodiac placed above each of their heads. Said to have been created between the late Heian period and early Kamakura period.

Belief in SOMIN
The folk tale of SOMIN is recorded in BINGO FUDOKI (a lost writing of regional gazetteers from Bingo Province).

Takeaki-no-kami was a deity of Hokkai (the Northern provinces), and as he was traveling to visit Nankai (the Southern provinces) to look for a wife, the sun set during his journey. Two brothers named Somin Shorai and Kotan Shorai lived there. The elder brother Somin was very poor, while the younger brother Kotan was wealthy owning more than a hundred houses and warehouses. Takeaki-no-kami asked the rich younger brother for a place to sleep during the night, but he was refused. Takeaki-no-kami then asked the elder brother. Somin showed him as much hospitality as he could with a meal of AWA (foxtail millet). Later, while Takeaki-no-kami was on his journey returning to the Northern provinces with eight princes, he stopped by the house of the elder brother, Somin Shorai, and asked him, “I want to repay your kindness from before. Do you have any family in the house?” “My wife and daughter are here,” Somin replied. Then Takeaki-no-kami ordered them to put a CHINOWA (a ring made of kaya grass) around their waist. That night, Takeaki-no-kami destroyed everything except Somin, his wife and his daughter. ?He said “I am the deity called Susanoo-no-mikoto. If epidemics break out in the future, those who are descendants of Somin Shorai, and who also wear the CHINOWA around their waists, will be saved”.(Takeaki-no-kami, Susanoo-no-mikoto, Gozu-tenno, and Yakushi Nyorai, are different names for the same deities and Buddhas.)

SOMIN-SAI Festival
This festival is held from midnight of the 7th through the early morning of the 8th in the lunar New Year. ?The participants, most of them naked, wearing only a FUNDOSHI (loincloth), pray for prevention from disaster and a good harvest, in the midst of a severely cold, snowy winter night. The festival is composed of the following five events.

●HADAKA-MAIRI (Worshiping Naked) (from 10:00pm)
People who are at a critical age and others offering prayers carry KAKUTO (square hand lanterns) to cleanse their body in the RURITSUBO River (Yamauchi River).? Shouting out “JASSO, JOYASA!” they make three trips between the MYOKEN-DO (a temple hall dedicated to Myoken Bosatsu) and the YAKUSHI-DO (main hall) to pray for protection against disaster and a good harvest.?

●HITAKI-NOBORI (Climbing the Bonfire) (from 11:30pm)
After piling pine branches (length about 6 inches) in parallel crosses in front of the main hall, they set it on fire, and people climb on top. They expose their bodies to the sparks for purification or for protection against disasters. All members sing a song called YAMAUCHI-BUSHI (a traditional folk song) repeatedly and in high spirits. This is the ceremony of HITAKI-GOMA.

●BETTO-NOBORI (Climbing of the Chief Priest) (from 2:00am)
The chief priest, following those carrying the SOMIN-BUKURO (a bag made from help filled with hexagon shaped wooden talismans) climbs up to the main hall, and makes a sacred fire for protection against disaster and an abundant harvest.

●ONIGO-NOBORI (Climbing of the Demons) (from 4:00am)
Two seven years old boys (ONIGO), wearing clothes made of hemp and with demon masks upside-down on their backs, climb up to the main hall while being carried on the backs of two menAfter the ONIGO enter into the main hall, the chief priest goes out to the GEJIN (outer place of worship for public people), then scatters about MANDARA-MAI. ?After a while, blazing torches are placed on the GOMA-DAI (altar) placed in the center of the GEJIN, and the ONIGO go around the fire three times.

●Scramble for the SOMIN-BUKURO (after the ONIGO-NOBORI ends)
The naked people with loincloths scramble for the “SOMIN-BUKURO,” a bag made from hemp, about 5-sho (9 liters) in volume, filled with KOMAGI (small wooden talismans with a hexagon shape) made from sumac cut to a length of 3 cm. Soon after the beginning, the SOMING-BUKURO is cut with a small knife, and the small KOMAGI talismans (also known as SOMIN SHORAI GOFU, or talisman of SOMIN SHORAI) scatter about. It is said that those who grab a KOMAGI will be protected from disaster, so there is a great competition to try to get one.But it is not over yet.? The scramble for the empty bag continues for more than an hour, until a chief referee proclaims one the TORINUSHI (the last person who grasped the neck of the bag). With this, the festival is over. 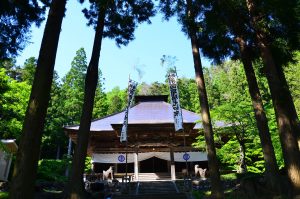